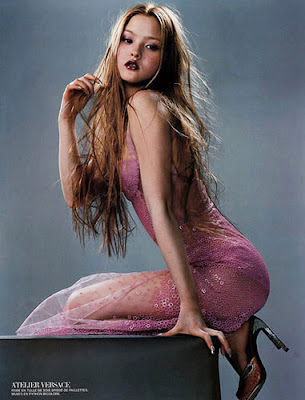 Model-actress Devon Aoki is pregnant by her fiancé, James Bailey. The Benihana heir got engaged to Boston-born Bailey last year, and she's expecting for the first time. A rep for Aoki confirmed, "Devon and James are extremely happy. They became engaged over the summer, and she has just found out she is pregnant." The 28-year-old, New York-born beauty's Japanese father was Hiroaki Aoki, a former Olympic wrestler and the founder and owner of the Benihana restaurant chain. She started modeling at age 13 and three years later replaced Naomi Campbell as the face of Versace. Aoki has done campaigns for Chanel, YSL, Hugo Boss and Lancome, and her movies include "2 Fast 2 Furious" and "Sin City." While he couldn't say when the baby's due or when the wedding will be, her rep added, "She just finished filming 'Rosencrantz and Guildenstern Are Undead,' so she'll probably take a break because of her pregnancy."

Darling! aka David Frank Ray
Manhattan, New York, United States
"Being a makeup artist is not only about applying makeup. It’s about everything around you, people, places, colors, all the things that inspire and affect your life."